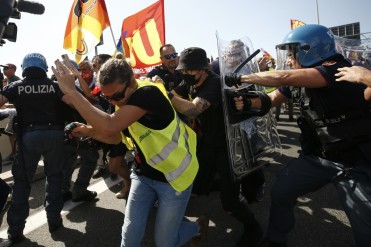 On 20th October we held a public Zoom meeting with workers at Italian airline Alitalia. They are fighting to save jobs and pay and conditions, in the wake of the companies far reaching restructure. Alitalia is to be broken up into 3 sections and renamed ITA Airways. The new company came into being on the 15th October 2021 and huge job losses are already being endured in the handling division, while aircraft maintenance is apparently being outsourced to private companies. National agreements around pay and conditions are not being honoured and staff transferring or being rehired by ITA are signing up on inferior terms.

The restructure is part of a European wide plan, with the involvement of the European Commission, to allow for only three main intercontinental carriers out of Europe and for these to be based out of France and Germany. Alitalia’s diminishing and breaking up, is in part to make room for these larger European airline companies and to encourage the expansion of low-cost/budget airlines nationally. This has obviously all been decided upon with little or no worker input. The Italian government, which owns ITA Airways, would likely claim that workers voices have been heard and use union leaderships agreement to the plan as evidence. Union officials in Italy, as they often are in the UK, are probably convinced to agree with the bosses plans, by promises of more members and national recognition agreements, that give the unions guaranteed dues and prestige. This however, is of course, no substitute for workers genuine involvement and agreement. Since demand for aviation has picked up a little, workers have responded to the plans with a number of official strikes, but these actions are hampered by managements awareness of them long in advance. The workers we spoke to on the 20th are with an independent worker collective called Tutti A Bordo (Everyone on Board). The name is simultaneously a call for unity across the airline and a demand that all staff should keep their jobs. The group is made up of militant workers from different departments that have come together, irrespective of their job roles and union membership, in an attempt to provide a forum for workers to develop and put forward their authentic demands. Not an easy task but their efforts are admirable. The group has made a point of trying to get workers on the streets in a militant fashion. Demonstrating inside airports, attempting to occupy the ITA HQ and blocking a main road to Rome’s airport. All this makes a stark contrast to the relatively subdued recent disputes at Heathrow. Alitalia stand to lose as many as 10,000 workers. That’s the same amount that British Airways have made redundant since the pandemic. In spite of the similarities in scale, the prospect of blocked roads, occupations and all out strikes at Heathrow has always seemed very distant. Tutti A Bordo doesn’t claim to have any great power at this time. It doesn’t have the ability to call a strike for example, but they are no less an important focal point in the struggle. They have also developed a significant partnership with another worker collective fighting the closure of their factory at GKN in Florence (Collectivo di Fabbrica- Lavoratori GKN Firenze). The groups of workers from different companies and sectors are demonstrating, blockading, occupying and striking together.

They are not the only workers looking to combine their efforts against the bosses attacks in the aftermath of Covid. In Italy an array of what are called “base unions” has developed. These unions tend to pride themselves on being more militant and encouraging much more rank and file participation within the organisation. These unions called for a “general strike” on 11th October, uniting struggles from many different workplaces and industries. Disputes at Ex-Ilva, Jindal Piombino, Whirlpool, Flextronics, Almaviva, Stellantis and Sevel were all drawn upon. On the day, 10’s of thousands of workers participated in the strike, ports and roads were blockaded and demonstrations were held across Italy. The workers we spoke to were quite clear however that the 11th October had serious limitations and alongside the GKN workers, expressed commitment to building towards a much bigger and more effective general strike, that draws in far more workers. Again, with echoes of the situation in the UK, the number and nature of the unions was a severe impediment in the strike. The mainstream unions, that still have the majority of members in Italy, did not support the general strike. The base unions that did support the strike are often, politically, on very different pages from each other, which can inhibit collaboration. They can also, like their mainstream cousins, sometimes be more concerned with the preservation and expansion of their particular organisation, rather than linking up with others in the interests of working class people in general. Tutti A Bordo is taking a sensible approach and seeking to build connections between workers that will get them to walk out in support of one another, no matter what the union leaderships may wish.

Port workers, air or sea, have always got lots of power. When supply-chain’s appear to be under pressure, as they do at the moment, they have even more power. If people and stuff doesn’t get to where it needs to be, it can have serious effects on companies and throughout the economy in general. The most successful labour dispute at Heathrow during the pandemic was the strike at BA Cargo. The Cargo workers got most of their demands met. BA workers in other departments had to accept mass redundancies and large cuts to pay and benefits. With a better organised workplace, the increased bargaining power at BA Cargo, could have been utilised for the benefit of workers at the whole company and beyond. In the current Alitalia dispute the situation is a little different in that Alitalia no longer handles cargo. Cargo services are carried out by different companies mainly through Malpensa airport, Milan. Workers in cargo have shown solidarity with the Alitalia workers but to what extent is unclear. Hopefully the collaboration can be expanded. Global supply chains seem fragile and workers should make the most of it. Another impressive worker collective is the west coast port workers organisation- Collettivo Autonomo Lavoratori Portuali. They participated in the 11th October general strike and are best known for refusing to load ships at their ports, that they discover are holding arms earmarked for use on civilians in places like Yemen and Palestine. These kind of actions are a crucial part of workers self defence and hold the promise of a transformed economy within them- workers deciding what gets to circulate the globe, not capitalists. The connections and trust built up by port and all logistics workers acts of solidarity, could be a critical part of bringing together working class people across borders. This is one of the reasons we feel it’s so important to organise at Heathrow and the surrounding area. We need more workers here realising the power and agency they have to help enact the profound changes needed, to give people control of their daily lives and protect our environment from the inherent logics of capitalist production. This knowledge is empowering and should give pride and purpose to work that the bosses make boring, frustrating and often demeaning. How do we want to spend our days? “Today, most of the work we carried out, was loading planes with crap that people don’t need, to make people, that probably hate us, richer….” Or “Today, to support fellow working class people on strike thousands of miles away, we refused to load a plane, while working fast and efficiently to transport essential goods for a worker run health service equally as far away…..”

Aviation workers can also play an important role in the battle to return our environment to health. It can appear daunting but should also be empowering. As yet, environmental concerns have not entered into the dispute at Alitalia. When we spoke with Tutti A Bordo they said that they were obviously concerned with the environment and well aware of the contradictory position climate conscious aviation workers find themselves in, but that they hadn’t managed to incorporate the issue in the struggle so far. They said one of the main reasons for being against budget airlines was that they help to produce excessive polluting flights. The pandemic has shown us what the “essential” work in society is. Society carried on pretty well with only about 40% of people going to work. In aviation we’ve seen that lots of the air traffic is quite unnecessary and harmful. Business flights have plummeted and the temptation for airlines will be to ramp up demand for leisure travel. Unless we can begin to use our positions at work to put environmental concerns at the centre of how we run aviation, the likelihood of genuine change is slim.

Another issue, external to the immediate struggle, that has made an impression on it, is the fight against the green pass (Italy’s vaccine passport). Workers are expected to produce a green pass as proof they have been vaccinated or be force to pay for regular Covid tests before they can enter the workplace. Many workers are resisting the scheme, but, as it is in the UK, it appears a divisive issue. Speaking in a personal capacity, as the Tutti A Bordo collective doesn’t have a unified opinion on the topic as yet, workers told us that it should be viewed as part of the general attack on the working class. That companies are using the green pass to circumvent costly health and safety measures, like social distancing and PPE. Matters are complicated by the fact that the green pass debate has drawn people into the orbit of these workers who are not very helpful when your trying to build a working class movement. Small business owners, spoilt little rich kids, conspiracy enthusiasts, and even fascist elements have all jump on the anti-green pass bandwagon. Messaging can get jumbled and direction can be lost, in such a menagerie of motivations. But situations like this can also provide opportunities for people to be exposed to a class perspective that will be helpful in future struggles. People could be brought into a battle by fears of satanic cults injecting microchips into our bloodstreams and leave with a far better understanding of how power operates in a capitalist society. Committed fascists will likely be the toughest nuts to crack and have to just be wholly rejected.

The motto of the workers at Tutti A Bordo and GKN was used by resistance fighters against fascism during the war- Insorgiamo. It means “let’s rise up.” We should all do our best to learn from the experiences of workers in Italy and do all we can to help them. Follow them on Facebook and send them your solidarity. What other ways might we be able to help? What do you think of the situation in Italy in comparison to our situation at Heathrow? We will be following the situation closely and attempting to build support for a solidarity action here in the UK. Get in touch and get involved! Insorgiamo Heathrow!!! 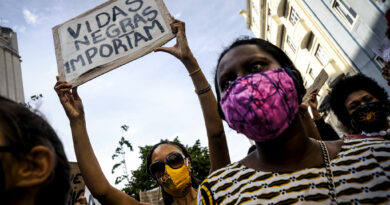